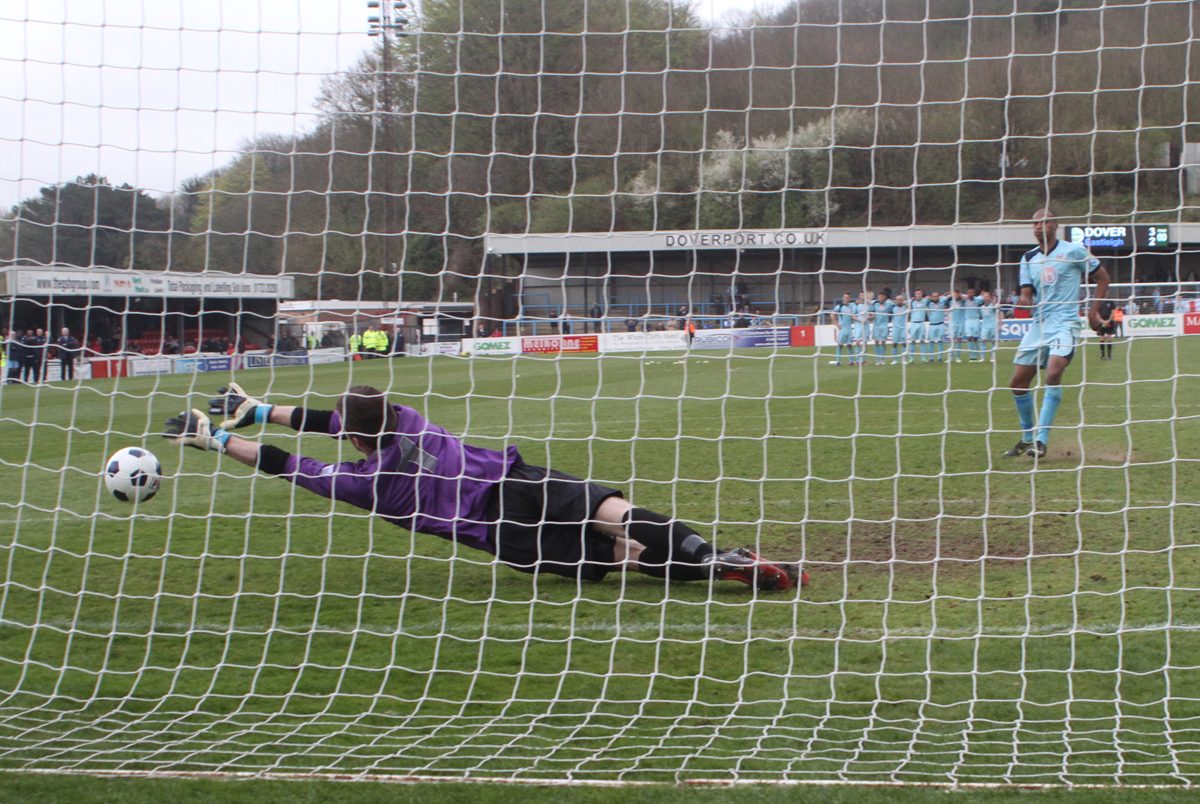 *BS*In a season which has so far fallen below expectations, one positive is the form of Mitch Walker. The goalkeeper, who turns 22 next week, has put in a string of good performances but the current points tally is something he is disappointed with*BF*:

“I’m not sure where it’s gone wrong – it’s hard to put my finger on anything in particular. A lack of goals obviously goes some way to explaining it, but it’s not like we’re not creating any chances – I’d be more concerned if that was the case. I think it’s all down to confidence.

“Once our strikers start finding the net, I’m sure they’ll start scoring regularly. If you look at the quality we have up front, they’re all capable players and all able to score a lot of goals. Obviously our recent form has been disappointing but we’ve still got 35 games left and we will turn it around.”

The club’s historical troubles at Crabble have been evident again this season, with three consecutive home defeats now recorded in the Skrill South. Walker sees a real difference between the way the side play at home and away: “When teams come to our ground, they often sit back and try to hit us on the break. That doesn’t happen so much away from home.

“I think it’s a combination of frustration and not getting ahead in games, and sometimes a lack of concentration, that sees us undone late on. In all three games (against Concord, Hayes & Yeading and Weston) I think we should’ve got at least a point – probably all three – in each.

*Q1*“When things aren’t going to plan at home, we need to stay calm and keep passing the ball like we can instead of hitting it long.”

Walker’s most impressive performance this season came in the 1-0 win away at Whitehawk, although he confesses it wasn’t a great team performance: “That game is probably the worst we’ve played all season. We nicked a penalty, but spent most of the second half defending. It shouldn’t be like that – we’re a big club in this league and, away to a newly-promoted side, we shouldn’t be coming away feeling we were lucky to win.”

The 6ft 3in stopper has saved his last five penalties for the club, a run stretching back to last season’s play-off semi-final victory over Eastleigh: “It’s surprised me – when I was younger I couldn’t save a penalty at all! I always seemed to dive to the wrong side, but since being at Dover I’ve been lucky. Part of me obviously hopes I can continue this run, however hopefully I won’t have to..”

Paul Fairclough recently handed Walker his second call-up to the England C side, which features players who play for clubs outside of the Football League. The only player outside of the Conference Premier to be in the squad that faced Latvia, Walker feels very proud of this recognition: “It’s amazing to be called up to play for your country, no matter what level it’s at.

“There are a lot of goalkeepers around who could’ve been called up but it was a proud moment for me to get that call. It’s great for my all-around development – working with different coaches, and playing with a different group of players definitely helps my game.”

The side’s next fixture is at home to the Czech Republic in November, a match in which Walker hopes to be involved in: “It’d be great if I was asked to be a part of it again. To do that though, I need to keep playing well for Dover.”

Walker recently signed a new two-year contract which will keep him at Crabble until the summer of 2015, a decision he found easy to make: “I had a few clubs interested in me, but at this point in my career I want to be playing football regularly. Last season was my first season of being number one at a club since I was playing for Brighton at under-16 level.

“I couldn’t turn the offer down. Working with Chris and Jake has helped me a lot and I’m really happy at the club. There’s guys my age who are at a higher level but are just sitting on the bench every week – I don’t want to be one of them. I enjoyed my football last season and hope that continues for the next two seasons.”

My discussion with Mitch about last season’s campaign soon turned to the final game of the season, where the side lost out in the play-off final in extra time to Salisbury: “That was hard to take. We had worked so hard for the last ten months and it all came down to that last game – but that’s football.

*Q2*“When we got that late equaliser, I really thought it was going to be our day. Losing in extra time was hard to take but it spurred me on and I learnt a hell of a lot in that game alone. Whilst I was so disappointed, I soon realised there was no point dwelling on the result – we lost the game, and there’s nothing more that we could do at the time.

Walker started his career at Brighton & Hove Albion, making his professional debut as an 18 year old in a match at the Withdean Stadium against Yeovil Town in the 2009/10 season. Harbouring ambitions to play at that level again one day, Walker comments: “I’m still young for a goalkeeper – usually people in my position peak at around 30, so I’ve got a long way to go yet. I’m determined to play League football again, but right now my focus is on doing my best for Dover.

I’ve got a lot of improving to do. At the moment, I’m just grateful to be playing. Every goalkeeper makes mistakes, but it’s how I learn from them that’s important.”

It is evident from my conversation with Mitch that he rates the setup at Dover very highly, from the ground and facilities through to the players he lines up alongside: “At this level, we’re lucky to have what we have – a great ground, excellent backroom staff and the fans that pay their money to come and see us every week.”

Reverting back to his disappointment at the side’s recent form, Walker has these final words: “Our main aim is to get back to winning ways, starting with Sutton tomorrow night. We’ve only played seven games and still have such a long way to go.

“I find it easier playing in front of a lot of fans, and the drop in home attendances is our own doing really – we can’t expect a high number of fans to keep turning up if we’re not producing the goods on the field. All I ask is that the fans remain patient, get behind the team and together we’ll get back to our best.”