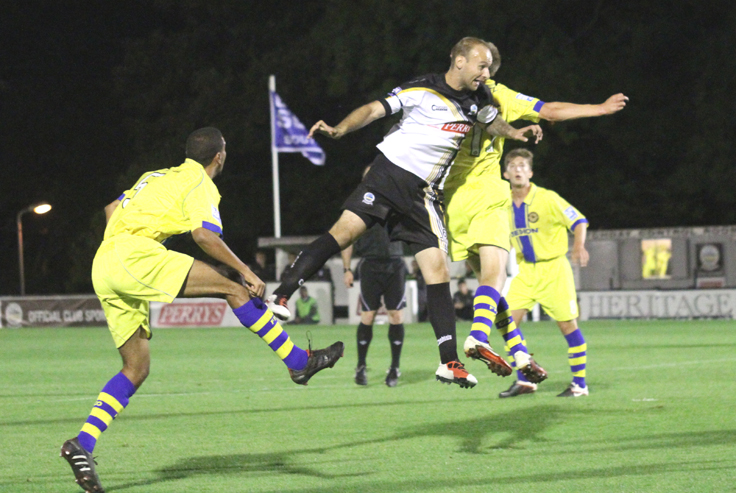 *BS*Whites’ central defender Steve Watt has made it clear that he’s more than ready for the tough fight back to full fitness.*BF*

Watt suffered a rare cruciate ligament injury against Havant and Waterlooville, just seven league games into his Dover career, and will now miss the rest of the season.

Despite this blow the former Chelsea man still seems philosophical about the whole affair: “I can’t describe how frustrating but it’s just part and parcel of football and it’s something I’ll have to deal with.”

In order to correct the damage Steve had to undergo surgery which has left him unable to walk without the use of crutches for a number of weeks. This, of course, makes everyday life very difficult but he is still just as determined to come back better than ever.

“I’m dying to get back really; I want to give something back to the club as they’ve been so good to me.”

There’s certainly no questioning his spirit and drive as he brushed off a serious shoulder injury right at the start of the season choosing to bandage himself up before every game rather than opting for surgery. Now that he’s finally been forced to stop for a while the
frustration is starting to build.

A career that features the highs of Premier League and FA Cup appearances for Chelsea, selection in Champions League squads and representing your country at a number of levels also, unfortunately, comes with its lower moments.

Steve has suffered a number of knocks in his footballing career but believes he is now a stronger player for it.

“I dislocated my shoulder after two games for Swansea and missed the whole season and then did exactly the same in the following year, something which of course I took very badly. Now I’m in a much better position to just get on, thanks to that previous experience.”

Steve’s injury came just before Whites’ previous manager Martin Hayes left the club and so he is yet to play for Nicky Forster. Although this does pose some problems, he maintains that his primary concern is to get back to his best for the start of next season.

He commented: “I hope I’ve showed the fans and the club what I have to offer in the games I’ve played. I was attracted to this club because of the real ambition here and I’ve got no plans of going anywhere else.”