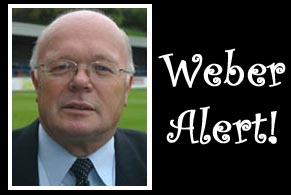 *BS*I WAS asked by a very eminent and distinguished journalist to consider writing a hopefully humorous column for the website on a regular basis – with my views and thoughts on any aspect of Dover Athletic that may be of interest to our fans.

*BF*How could I refuse such a request to put my monumental IQ to work on such a project?

There has been such a response from supporters who I have already talked to about it but, despite their views, I am prepared to go ahead.

If I offend one or two people, I am very disappointed – because I’d rather offend everybody! It’s so much more fun that way!!

You may have noticed that modesty is one of my many qualities that are far too numerous to mention.

Firstly and belatedly, I would like to wish everybody associated with DAFC a very Happy New Year and to show my generosity of spirit this even extends to our charming friends from Folkestone, Tonbridge and Dartford.

The other day I was interested to read a message from a fan who has moved away from the area and now lives hundreds of miles away. He stated that there was a “great deal of discontent in the dressing room”.

I have not noticed this gentleman training with the players or in the dressing room recently – so all I can think is that he must have remarkable eyesight and hearing from all that distance away.

I hope he can pass me the telephone number of his optician. Then I could pass the details on to some of the referees and linesmen – and perhaps then they will get more decisions right.

After we lost to Dulwich on Sunday, one supporter suggested that Terry White was not perhaps our saviour. That, I must say, is a little premature. Let’s give him a chance and not judge him on one match.

I am disappointed to report that on matchdays a few supporters have been spotted not using the official entrances at Crabble and sneaking through the fencing instead and must warn them that anybody caught in the future will be frog-marched back into the ground and forced to watch the rest of the game. We can see you sneaking out!

I did say at the beginning that I would attempt to make these observations humorous but I must remember Simon Davis, who I got to know well over the last few months and would just like to repeat that he was a true Dover fan, great supporter and good friend who I will miss very much.

The next two games are Molesey and Croydon at home so I hope you will keep up the fantastic support and I will walk among you passing on pearls of wisdom and raising the intelligence level to new heights.

My guess is that we will win both games and improve our goal difference by four – so there is no pressure there Terry.

Come On You Whites!!