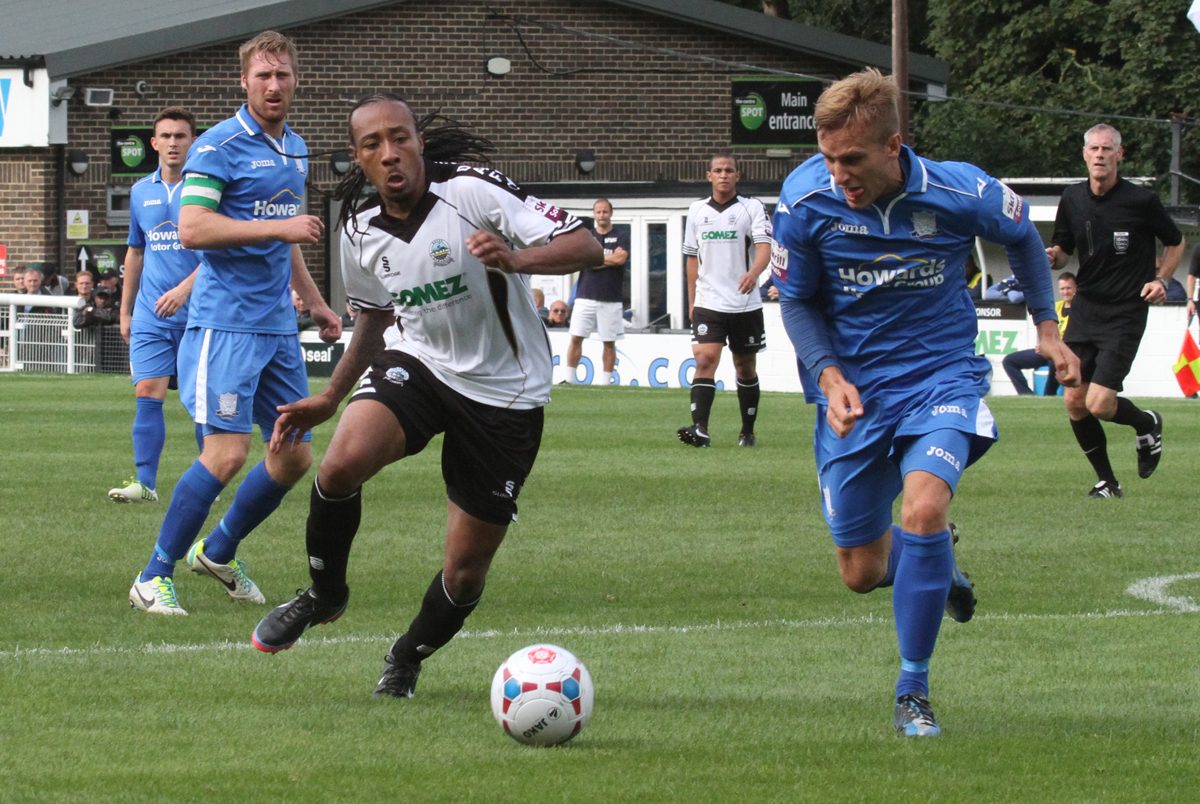 *BS*Dover Athletic travel to Somerset on Saturday to face Weston-super-Mare, with both sides sitting just outside the playoff places. Dover fell to a 2-1 defeat when the sides met at Crabble back in September.*BF*

Whites’ 1-0 defeat against Sutton United on Tuesday night ended a run of three consecutive home matches, and whilst six points were picked up from these, an overriding feeling of disappointment was in the cold air at full-time.

The sides meet at Woodspring Stadium on Saturday both on reasonable runs of form – Weston sit fifth in the home form table with four wins from their last six, whilst Dover sit in second in the away form table with three victories from the same period of time.

Weston have never been relegated in their history, and are on track to emulate their highest ever league position of 7th in the Conference South, achieved last season. With just over two months of the season remaining, they currently sit one place higher, just out of the playoff places by virtue of goal difference.

Saturday’s victors could, depending on Bath City’s result, finish the day in fifth place. City host a Basingstoke Town side who have won only once in their last five matches.

Weston’s home record has been up-and-down – whilst impressive victories have been recorded over Eastleigh (3-2) and Concord Rangers (5-0) amongst others, there have also been disappointing defeats when welcoming Ebbsfleet United (0-6) and Gosport Borough (0-1) to the Woodspring Stadium.

It is this inconsistency which Whites will be looking to capitalise upon at the weekend, and the teams’ away form gives hope that a vital victory can be recorded. Having won seven of their twelve matches on the road thus far this season, conceding eight times in the process, is an impressive record and one that has kept the club’s season alive.

If away form had been identical to home form, the side would be flirting with the relegation places. Therefore, performances at Crabble need to improve and away form needs to remain at its current level if this season is to be a success.

In the four previous league meetings between the sides at the Woodspring Stadium, Whites have come out on top on two occasions. Almost a year ago to the day, a brace from Ricky Modeste helped the side to a comprehensive 3-0 victory in Chris Kinnear’s third game in charge.

Modeste found the net again in this season’s match at Crabble, but saw his goal cancelled out by strikes from Tristan Plummer and an injury-time winner from Nabi Diallo. That second goal was shrouded in controversy, with a hopeful ball into the penalty area being gathered by goalkeeper Mitch Walker – until he appeared to be impeded by Diallo, resulting in the England C international dropping the ball after landing dangerously on his neck with Weston’s number seven gleefully tucking away the loose ball.

Dover striker Jeff Goulding will be available for selection, as the suspension leading on from his red card against Sutton in midweek does not kick in for a couple of weeks. He will be competing for a starting berth with Nathan Elder, who offers a different attacking threat to Goulding and will be keen to reinforce his first-team credentials after his own sending off in the FA Trophy against Eastleigh.

There are not believed to be any injury worries for Chris Kinnear ahead of Saturday’s match, but after the at-times lacklustre performance in midweek he may opt to rotate his squad. Liam Bellamy and Moses Ademola are fighting for a place in the starting line-up.

Speaking to doverathletic.com after the defeat to Sutton, Kinnear urged fans to keep faith with his side: “’I understand the fans frustration, but look at what has happened here the last few years. It’s easy for me to make lots of changes, but is not good for the long term future of the club.

“I want to build a side and keep them together. You only win things at this level with consistency. At any club where I have been successful, it has taken time. ‘The lads don’t want to wait another year, they think they can get into the play offs.”