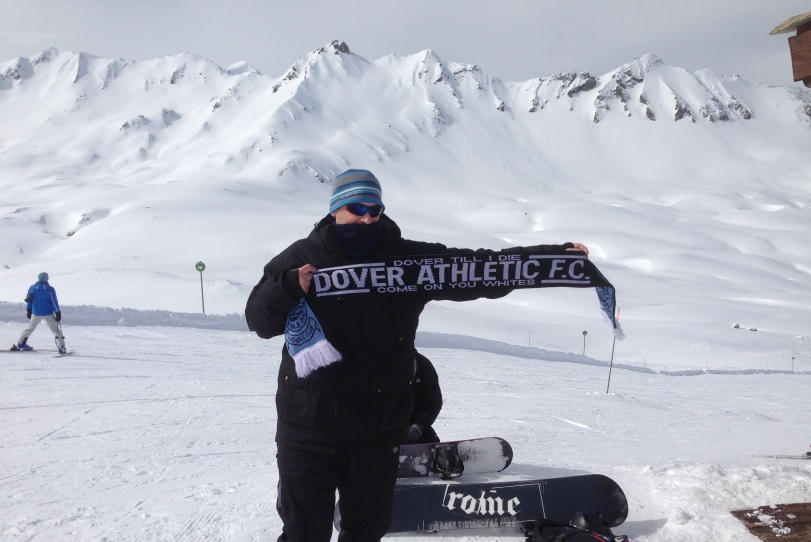 *BS*In the latest of our series on fans showing their support for the club around the world, DAFCtv cameraman James Harvey and California-based Roger Castle share their stores.*BF*

Above is a photo of James Harvey on the top of La Grande Motte near the Glacier De LA Vanoise during a recent snowboarding holiday in the Alps.

James said: “I was following the Bath game on *Link2* before having this photo taken – odd how I can get five bars of phone signal on top of a mountain but only three bars in River!”

*BS*Roger Castle, based in Mission Viejo, California reminisces about his time at Dover Athletic and following the club from the other side of the world:*BF*

“My family has deep roots at Crabble; my Dad was on the Board in the Roy Little and Jack Clover era, and I played in the reserves… with my Dad on the Board I played a lot!!

“I have great memories of Dover in the sixties, going over the Northrop bridge, and cold nights at Crabble training.

“In those days the players came down from London at the weekends in pre-season, and I remember a midfielder Brian Kelly. We went for a run along the promenade, up to the lighthouse, and when we got out of sight, Brian’s wife picked him up in the car and Clover thought Brian was superman as he beat all of us back by miles!

*Q1*”I now live in Southern California and am very involved in youth football. I am President of a kids club called SoCal Athletic (funnily enough) and keep up to date with Dover via the website.

“Football over here is getting better but I still spend more time watching the television than going to Los Angeles to watch games. I saw Beckham a few times and am glad he has gone back to play some real football, but being a Gooner he never did play real football!!

“Brian and Janet Butcher (former Youth Section chairman and secretary) come in the Summer for some sun and we spend hours over a bottle of Tequila talking about the old days!

“I look on the website at the ground and try to see my old footprints up and down that left wing, it brings tears to my eyes, and so did the bucket of cold water Jimmy Blakey used as his motivational piece. Regardless of the location of an injury, his placement of the old sponge changed my voice forever.