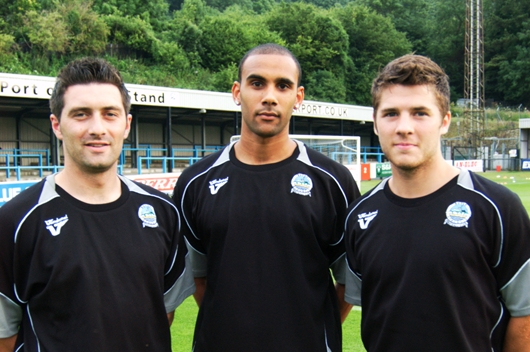 *BS*DOVER ATHLETIC have not even kicked off the new season – but have completed the TREBLE!

Joining the club are striker Ben Hunt and midfielder Sam Cutler – while defender Dean Hill has won a new contract after impressing the new Dover management staff in pre-season.

Hunt, 20, started his career at the famed West Ham Academy of Football before joining Bristol Rovers for two seasons, where he made 14 first-team appearances.

He had loan spells at Gloucester and runaway Blue Square South champions Newport last season before his release from Rovers this summer.

Hayes said: “Ben reminds me of Steve Morison, who I signed at Bishop’s Stortford and is now at Millwall. He is very direct, can pick up the ball, turn and run at goal. I think he’s going to get quite a few goals at this level.”

Cutler joins from Welling United and Hayes said: “Sam has shown ambition in wanting to sign for us. He is a decent player and gives us more options.

“And I’m only too happy to keep Dean here. His attitude has been good since returning to pre-season and he was part of a strong squad last season. I am delighted to offer him a new deal, he deserves it.”

Hayes revealed that he wants to be able to change tactics, formations and players for different matches – or different stages of games.

He said: “To do that, we need good options across the park. This is definitely going to be a squad game this season.

Chairman Jim Parmenter added: “It’s going to be exciting this season. We’re bringing in players that will play an attractive style of football and I am delighted we’re building a strong squad.”