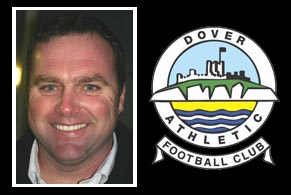 *BF*Clive has been suffering back problems recently and is hoping to get treatment very soon. He has been unable to manage the team for the last two games or take training sessions due to the problem, which has prompted the club to bring in Terry while Clive recovers.

Whites chairman Jim Parmenter said: “Clive’s back problem has made it difficult for him and he hasn’t been able to get down to training or manage the side.

“It is important Clive gets himself better and we are granting him sick leave until he is in a position to manage the side again.

“Terry is here on a caretaker basis, that’s the agreement we have, and Clive Walker remains the manager of Dover Athletic.

“Steve Nolan will be working very closely with Terry running first-team affairs. In that way, we will maintain as much continuity as possible.

“Terry has been involved in management at this level and higher before and is an experienced operator. He is also an excellent motivator and that’s going to be very important with some big games coming up while Clive is away.

“We see Terry as a safe pair of hands to look after on-the-field matters during this period.”

Terry attended our 2-0 home win against Sittingbourne and will be taking charge for Sunday’s game at Dulwich Hamlet.

He cannot wait to get to work after being impressed by the club’s set-up.

Terry said: “There are not many clubs where I’d have entertained this kind of arrangement. But when a club like Dover come knocking, you’ve got to jump at the chance.

“I arrived at the ground about 11am and walked around for a while, taking it all in. I think Crabble is a lovely ground and then when I saw the support, I was blown away a bit by it. The fanbase Dover boast at this level and the noise they generate is something else, it really is

“My remit is simple – help the club grab that automatic promotion spot. And I want to keep some continuity going while Clive is recovering.”

*BS*THERE will be a full in-depth interview with Terry White appearing on doverathletic.com on Tuesday afternoon.