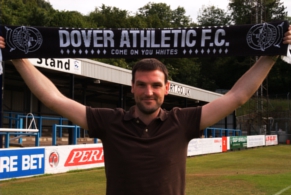 *BS*ROB GILLMAN has signed for Dover Athletic – ending the club’s one-year pursuit for the Bromley captain.

Hayes – who managed Gillman when he was a youngster at Bishop’s Stortford – is a big fan and made him a top target as soon as he sat in the Whites hotseat.

He said: “Rob is a good footballer and someone who is joining us for all the right reasons.

“The lad is ambitious and I know he wants to play at a higher level of football. He had a chance to play in the Blue Square Premier for Grays – but the deal wasn’t quite right for him to give up his job.

“Bromley obviously didn’t want to lose him. No-one wants to lose their captain. And he’s coming here to improve as a player and because he sees the ambition we have to go for promotion.

“He played for me at Stortford so I know all about him – and he ticks so many boxes for us. We needed a centre-half, he is a good player, has a good attitude – and he is a Kent boy too, so he will be a good fit for Dover.”

Gillman said: “Martin is a good manager. I worked with him before and he gets the best out of players. He also has a proven track record of finding little gems and can be a big success at Dover.

“I wanted to be part of that as this is a club that can for sure get into the Conference – and I want to play at the highest level possible.”

Assistant-boss Paul Joynes added: “Rob is a terrific player and did well for us at Stortford. We got him from Luton then and he has bags of potential. He’s a player who we hope to develop and get him with us into the Conference.”

Hayes has been impressed by the fitness levels in training – and cannot wait to start some ball work with the players.

He said: “It’s all been about getting fitness levels up. Everyone has turned up in good condition, which is very pleasing, and now we’re chomping at the bit for the pre-season games to start.

“Obviously, we’ve not done any ball work yet so we’ll be gradually getting into that – and playing some pre-season games, which are designed to get more competitive to prepare us for a long tough season.”