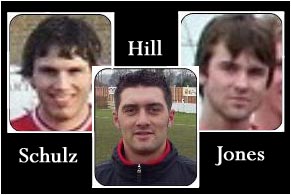 Highly-rated defenders Schulz and Hill strengthen Whites’ back line, while left winger Jones will give the team more attacking options.

Schulz, a key player in Ramsgate’s rise up the pyramid in recent years, will add further quality to Whites’ defence. Along with Craig Cloke and Laurence Ball, he will give us a strong pool of talent at centre back.

Hill, a former Dover reserve, returns to Crabble after nearly five years away at Sittingbourne, Ashford and Ramsgate. He established himself at left back for the Rams in the past three seasons and will compete with Sam Gore for the No3 shirt next season.

Jones repaid Ward with three goals and two man-of-the-match performances in the last five games of the season.

*Ppic1*Jones, who is known for his ability to retain possession and skilful feet, caught the eye of Dover assistant manager Darren Hare.

Hare told doverathletic.com seconds after the ink had dried on the contracts: “We’re delighted to sign these three players, who are undoubtedly going to boost out squad for next season.

“Dean is a quality left-back and I’ve been impressed by Sam’s performances for Ramsgate.

“And in Olly, Clokey and Laurence Ball, we have the very good, solid central defence that we hope to be one of the best in the Premier Division.

“We’ve decimated Ramsgate’s team by signing these three, which is a shame for them. But that’s football isn’t it? We’re thinking about ourselves and these three lads were all transfer targets – and they’ve agreed to come. We’re delighted.

“Now we’re looking at bringing in another three players. There are a couple we’ve offered deals to who have not decided yet – and then of course there will be trialists at the pre-season games, so I expect a quiet few weeks now on the transfer front.”

Boss Andy Hessenthaler was watching Ebbsfleet do Kent proud today by winning the FA Trophy Final at Wembley against Torquay – and left his assistant and chairman Jim Parmenter to complete the formalities of signing the players this morning (Saturday).

A few hours after the news had broken on doverathletic.com, Hess told our friends at Kent News: “I’ve been looking at Olly Schulz for a while, he is a player that has impressed me a lot and I am glad that we have managed to bring these three players to Crabble.

“All three players will fill a hole in our team for next season and I am sure they will prove to be great signings.

“We got all three from Ramsgate so I don’t think manager Jim Ward will be too happy with me!”