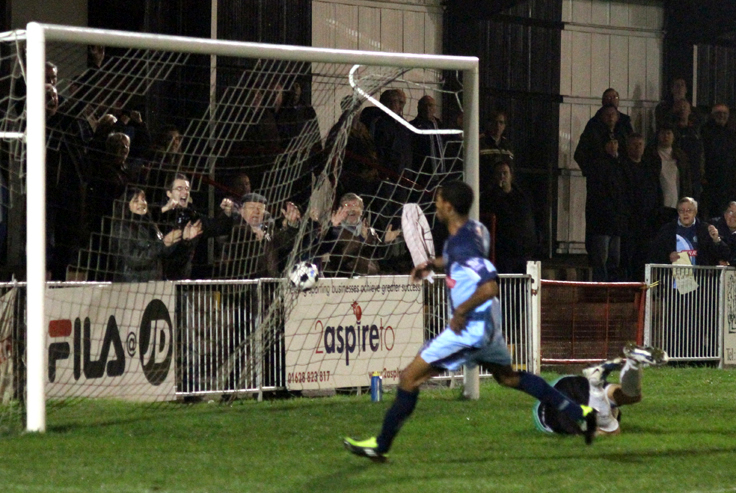 *BS*Two goals in five minutes by James Walker in a 4-1 win at Maidenhead on Tuesday sent Dover up two places to 5th.*BF*

Substitute Harry Baker netted the fourth with the last kick of the game. Baker made an impact from the bench after George Purcell was taken ill midway through the first half.

The scoreline perhaps slightly flattered Dover in the end after Maidenhead put on a lot of pressure in the early stages of the second half, but Whites were the more consistent side throughout the game and were rewarded late in the second half.

Match reporter Kevin Harris, who also provided the updates for Tuesday’s MatchdayLive service (followed by more than 1200 people on doverathletic.com), says in his write-up of the game:

“After a fairly even first half, Dover took the lead in injury time through Donovan Simmonds’ tap-in. Maidenhead put the Whites under pressure at the start of the second half, and Ashan Holgate levelled the scores. However, a brace from James Walker turned the game back in Dover’s favour, and the gloss was put on a fine performance when Harry Baker netted the fourth.

“In the single minute of first half injury time, Whites took the lead. Agustin Battipiedi unleashed a fierce drive from 25-yards out, which hit the underside of the bar and bounced out. Thankfully though, Donovan Simmonds was on hand to tap the rebound into the net, to the delight of the travelling Whites fans.

*Lpic1*”With 74 minutes on the clock, Whites re-took the lead. Walker burst into the corner of the area, where he had his legs taken away by Martel Powell. Whilst the referee dealt with the limited protests, keeper Sam Beasant disgracefully kicked at the penalty spot turf to try to make it harder for the kicker. Thankfully Dave Beasant’s son received his comeuppance when Walker coolly slotted the ball past him.”