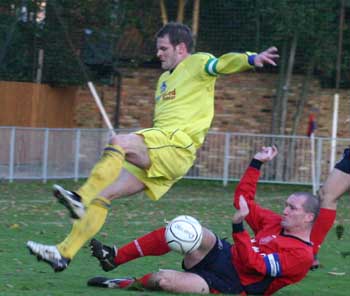 CRAIG WILKINS believes he can add a bit of muscle upfront that could yet save Whites from the drop.

The club’s chances of staying in the Ryman Premier Division have been written off by a number of people – but Wilko is having none of it.

Dover’s ace striker scored at high-flying Braintree during Saturday’s 1-1 draw on his full 90 minute return to first-team action after a few months out with continued back problems.

He said: “There’s still four games left and the draw at Braintree has kept us in the fight. Had we lost, then a seven-point gap looks a huge ask.

“But, with our goal difference looking better than Cheshunt, a win this Saturday at home to Hampton and Richmond puts us within touching distance of staying up.

“There’s no doubt that we can do this. If we win our last four games, I’m sure we’ll stay up. But three wins could still be enough if Cheshunt and Harrow keep slipping.

“Tonbridge in a fortnight is going to be a massive game if we’re still in there. If we were to win there, that could put them out of the equation.

“The club shouldn’t be in this position but football sometimes is like that. Clive has come back and completely transformed things and the new board are a breath of fresh air at Dover Athletic.

“I can sense a real positive energy throughout the entire club. We have a great set-up and everything at Dover is now geared at looking up rather than down.”

Wilko, aged 30, injured his back last January but played through the pain barrier when he would have been better off resting. His injury only become worse and he has suffered again this season.

He said: “We were in a bad situation last year and I wanted to play on to help the club. In the end, that was a mistake. I should’ve been resting because my injury just got more serious.

“Everything seemed fine when I returned to the side this season but then I did my back in again at Slough. It gave way during a sprint and I’ve only now just recovered.

“All in all, I’ve had five injections in there but feel that I’ve had good rest now – and the specialist seems happy with the way things have gone.

“I’m certainly delighted to be back for these crucial games because I believe I can offer the team something in the final third, especially in the air.”

Wilko watched with disbelief earlier in the season from the touchline as the club’s on-the-field fortunes continued to nosedive.

He admitted: “It was very frustrating. When you’re just watching and you see those balls go into the box, you do wonder whether you’d get on the end of one or two and stick them in the back of the net.

“Since Clive’s returned things have improved greatly but I’ve still found it frustrating because there’s been games we’ve drawn that perhaps we could’ve won. And maybe I would’ve got a goal or two that would make the difference.”

Wilko admits his legs felt heavy after Braintree but is now very nearly back to 100 per cent fitness and cannot wait to face Hampton and Richmond on Saturday.

He said: “I played at their place earlier in the season and they’re a very physical side. They tried kicking lumps out of me a bit (see photo above) so I don’t expect it to be any different at our place!

“It’s another must-win. We can get a result and if we do then that can roll into our last three games.”

Meanwhile Wilko has been offered a one-year deal at the club. His current contract expires next month.

He said: “I want to stay. The reason I joined in the first place was because Clive was here. He’s back and I’m delighted about that. I certainly love playing at Dover and, with a few little things to sort out, I’ll be signing for another season.”