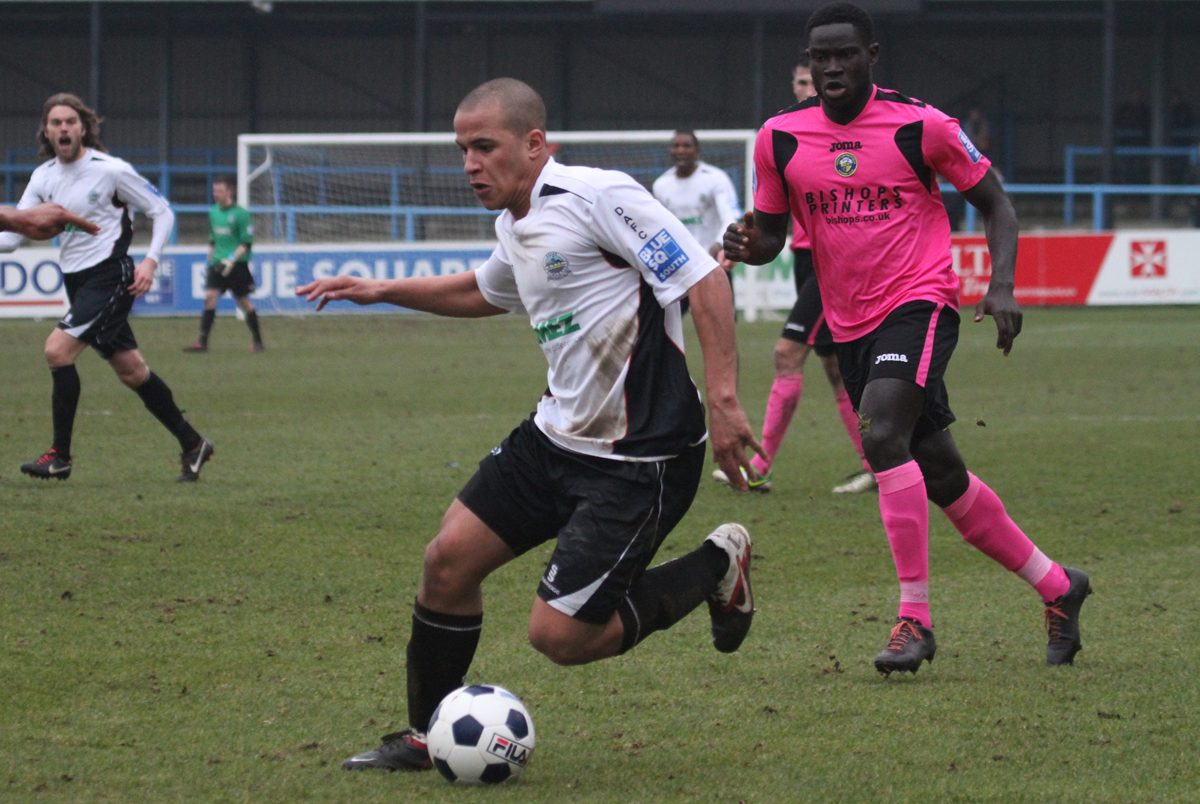 *BS*Tom Wynter talks to doverathletic.com about the challenge of combining playing football and working full time, the Chris Kinnear factor and dishes the dirt on some of his team mates.*BF*

Wynter, who also works as a plumber in Detling Hill, has been in red hot form in recent months and puts his part in Dover’s recent unbeaten run to changes in both his playing and personal life:

“I moved work half way through the season. Before I was waking up really early and getting home late and it was affecting my training and performances. I am so much happier now and my boss Nick Cunningham is a massive Dover fan!”

The return of Chris Kinnear to the club has coincided with a seven game unbeaten run for Whites, which is no surprise to Wynter: “He has created such a positive vibe, as he does not want any negativity between players on the pitch.

“He tells us how he wants us to play and we all know what is expected. We all have to work hard for each other, but it’s worth it – especially when the team wins!”

The defender added: “This is the strongest squad collectively and ability wise. Everyone deserves to be in the starting line up and all the players are working hard and fighting for the shirt.”

With Whites being in such good form, promotion is well on the cards for Tom this season: “We can definitely make the play-offs, if we don’t then there is a major problem! But there is a possibility we can win the league as well.

“We just need to keep picking up as many points as possible, starting with Salisbury on Saturday. We want to keep this positive run going and I would love the challenge of playing Conference football!”

Ambition wise, Tom admits there is nothing like playing professional football and would jump at the chance if the opportunity ever came along: “I would love to give it a go but it would need to be right for me. It was difficult to adjust at first when I moved to Dover as working, playing and doing the extra training is hard.”

*Ppic1*Having also played for Gillingham, Tom pointed to being involved in their squad for the play-off final victory over Shrewsbury in 2009 and Dover’s famous FA Cup run of two seasons ago as his career highlights so far: “Even though I didn’t play (against Shrewsbury), to be involved and be on the open top bus was mad. Hopefully Dover winning promotion this season will be one too!”

Finally, Tom gave the lowdown on some of his team mates…

Best player: “Daryl McMahon – He is so composed on the ball.”

Worst fashion sense: “Lee Hook – He wears these snap back caps to try and be fashionable, but he looks like a clown!”