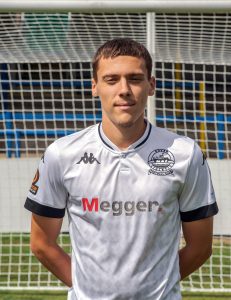 Former Kosovo under-21 captain who returned to Crabble in the summer after making 18 National League appearances for us last season after arriving on a non-contract basis from National League South side Braintree Town in late January.

Krasniqi was born and raised in London and represented his father’s native Kosovo at under-19 and 21 levels.

He spent 18 months with Colchester United before being released at the same time as former Dover Athletic defender Paul Rooney.

After his release, Krasniqi made seven appearances for Billericay Town before joining the Finnish side, SJK, in February 2020.

His contract was cancelled by mutual consent in September 2020 and he returned home and joined Braintree in October where he scored two goals in 12 appearances last season.