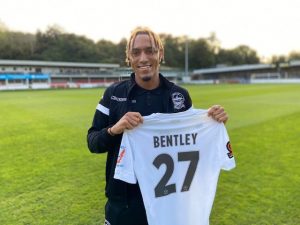 Forward who joined us in September 2021.

He made his debut as a second-half substitute in the 0-0 draw with Solihull Moors in the National League clash at Crabble.

The 23-year-old Londoner originally trained with Andy Hessenthaler’s squad before the national lockdown last year before heading back to university in the United States.

He played for the Missouri State Bears and then Minnesota United.