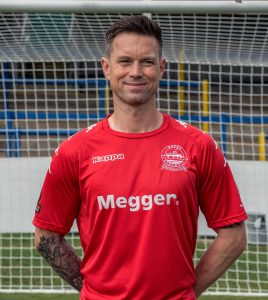 Experienced goalkeeper who made the move to Crabble in June 2022 after leaving League 2 Sutton United.

Nelson has made well over 500 appearances in his career including 223 for Gillingham during a five and half-year stay at Priestfield.

He joined the Gills from Notts County in 2012 and was a key man for Martin Allen’s League 2 title-winning side, playing every game.

In Nelson’s second season with Gillingham, he won the Player of the Season award.

After leaving Gills, Nelson signed for then League 2 Yeovil Town in 2018 and made 43 appearances for the Glovers during a two-year spell.

After starting his career with Cirencester Town, Nels joined Millwall in 2000 and had spells with Doncaster Rovers and Hucknall Town before joining Brentford in 2004, where he made 133 appearances for the Bees.

In 2007, he joined Leyton Orient for a year before leaving for Norwich City. One year in Norfolk was followed by a year with Scottish Premiership side Aberdeen.

Nelson then joined League 1 side Notts County, where he established himself as the first-choice goalkeeper, making 90 appearances before he joined Gillingham.

He also made three appearances for Crawley Town in the 20/21 season after leaving Yeovil.