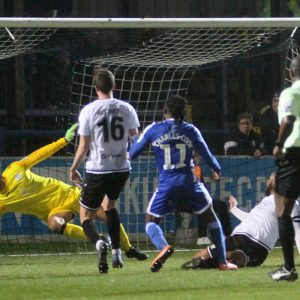 Warning: count(): Parameter must be an array or an object that implements Countable in /homepages/30/d4295741280/htdocs/wordpress/wp-includes/formatting.php on line 3403

A wonder goal dented Whites’ play-off chances against their promotion rivals at Crabble on Saturday.

The loss leaves Athletic two points outside the play-offs in 11th position on the National League table.

Carl Dickinson was forced to head Nassim L’Ghoul’s early cross over the bar to prevent the ball reaching Ricky Modeste at the far post.

Dominic Poleon then flashed a ball across the goalmouth, a cross that none of his Dover teammates gambled on.

Richards went sliding into the area to try and connect to Dickinson’s swirling cross, only to miss the ball by a matter of inches.

With half-time looming, Luke Wilkinson went for the spectacular with an overhead-kick from Charlie Lee’s long throw, an effort too high to trouble Worgan.

There was time for the away side to have another effort, with Duffus volleying onto the back stanchion after Matt Worthington’s initial shot had been blocked.

Inih Effiong then sprinted clear after Lee had flicked a goal-kick towards his own net and with just away keeper Stuart Nelson to beat, the striker was felled in the area after Wilkinson took both the man and ball with a last-ditch challenge.

After the restart, Worgan redeemed himself after dropping the ball, rushing out to block Smith’s effort.

But Athletic’s keeper had no chance with Yeovil’s next chance.

Duffus held off Will De Havilland on the touchline and passed back to Richards to send a shot from the edge of the area into the top corner, with Worgan only able to push the ball into the net via the underside of the crossbar.

Albi Skendi couldn’t match his teammate’s fine finish with Yeovil’s next attempt as the Albanian blazed over following good work out wide from Hutton.

Duffus thought he had doubled the Somerset side’s lead after running on to Skendi’s pass and slotting through Worgan’s legs, only for the assistant to rule the finish out for offside.

The striker then went close again, nodding Smith’s knock-back into the box against the bar with the same player lashing the rebound wide.

Having used all his substitutes, one of Hessenthaler’s replacements nearly leveled matters when Ade Yusuff forced away keeper Stuart Nelson to parry his close-range volley from Bobby-Joe Taylor’s cross.

With time running out, Inih Effiong volleyed towards goal, but his strike lacked the power to trouble Nelson.

A lacklustre Dover attack were unable to find a route to goal as the Kent side remain outside of the top seven with nine league games remaining.

Whites next host Gillingham in the quarter-final of the Kent Senior Cup on Tuesday 10th March, kick-off 7:30 pm. 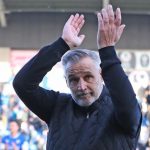 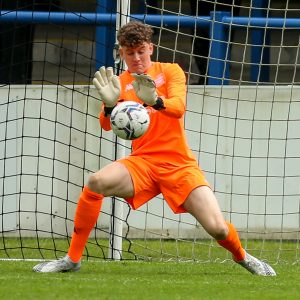